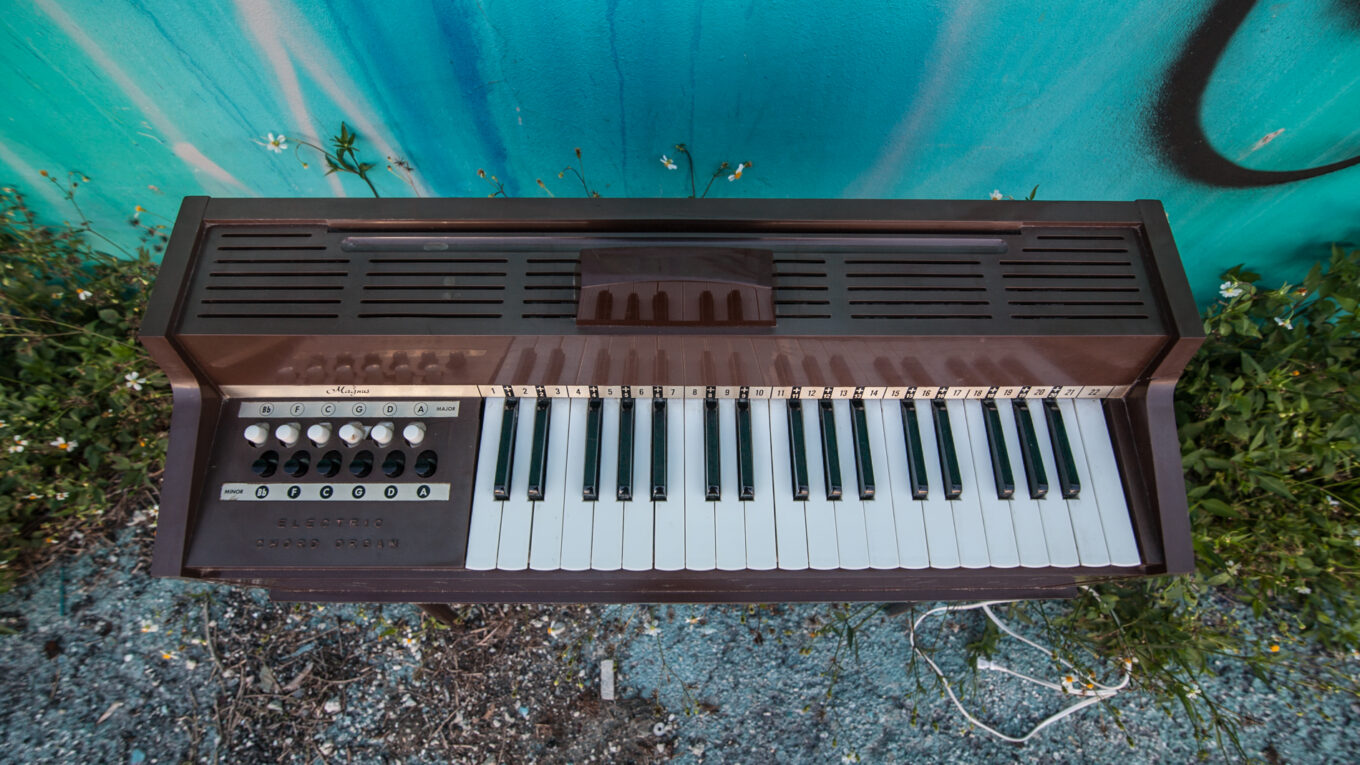 Although I stalled our interview because of Christmas time and personal issues arising, I cannot discredit composer and performer Molly Joyce’s attitude and ongoing projects. This year, her new LP decisively proved that music is a powerful tool to spread word of disabled people’s issues in society – even if the primary instrument you use is a toy organ.

Many people have critically acclaimed Molly’s work, and nearly three years ago she released her debut album Breaking and Entering. Released by New Amsterdam Records, the album included the use of the electric vintage toy organ Molly bought on eBay, as well as her own vocals and electronic sampling in January 2020. However, in October 2022, Molly released her second album Perspective, which directly highlights the difficulties disabled people have to master with the use of interviewees throughout.

It was great to sit down and speak with her just before Christmas and hear about what she’s been willing to offer and has planned as well.

Well, Molly, can just provide all my readers with a bit about your background?

Okay, sure. My name’s Molly Joyce, I’m 30-years-old now, and was born and raised around in Pittsburgh, PA, in the United States. But, at seven-years-old, I was involved in a car accident that nearly led to the amputation of my left hand. Before that, I’d already started playing music a little, so, afterwards, I figured out some ways to play music differently.

Music clearly maintained your focus. How did you break into music when it came down to education?

Well, I’ve been to three music schools, and graduated from The Juilliard School, Royal Conservatory in The Hague, and Yale School of Music.

When I started undergraduate studies, the student affairs office wanted to notify the music faculty of my impaired left hand because of the potential accommodations. I was horrified by the prospect of the composition faculty finding out about me because of my disability rather than my music. As an 18-year-old, I had never been labeled as ‘disabled’ throughout previous schooling, and felt a real reckoning point with the then-forced label of disability, as something forcing me to choose the ‘disability first’ route rather than myself consciously and intentionally choosing it.

And how did they treat somebody who was disabled?

It kind of worked for me. When I started off at Julliard, they wanted to label me as disabled. This was so they could tell my teachers why I couldn’t do certain things, like play piano. This was traumatising for me. I’d never publicly identified like that, and didn’t really want the teachers to find out at first, but since then I’ve grown into that identity more.

Before we talk more about your own music, can you tell us what styles/genres of music do you listen to yourself?

I listen to pretty much anything and everything. Like hip-hop, to indie rock, to contemporary classical. Anything that’s new, I’m always very interested in as well – a lot of electronic music.

So, what do you label your music as at the moment?

Your toy organ has been such an important asset to you when making this music. However, are there any other instruments you see yourself using in the future?

And which musicians or composers have influenced you?

A lot of composers have influenced me, especially those from Bang on a Can. Bang on a Can is a composer-led collective, founded my composers Michael Gordon, David Lang, and Julia Wolfe. They describe themselves as dedicated to making music new. Since their first Marathon concert in 1987, they have been creating an international community dedicated to innovative music, wherever it is found. With adventurous programs, they commission new composers, performs, presents, and records new work, develops new audiences, and educates the musicians of the future.

So, this obviously involves David Lang, Julia Wolfe, and Michael Gordon. As well that, composers such as Philip Glass, Steve Reich, and Missy Mazzoli. A lot of American composers, really.

You’ve now obviously got your own album released, and it’s available for all to listen to online. Can you give people more information about the release of your album Perspective?

Perspective features disabled interviewees responding to what access, care, interdependence, and more means to them. The project includes their voices aurally and visually, with accompanying open-caption videos, and was released Oct. 28 on New Amsterdam Records in celebration of Disability Employment Awareness Month.

It took about three years to create, as the genesis for the idea was born in Fall 2019, and throughout the three-year period, I worked on the project in sections with different iterations and presentation opportunities.

I am the lead artist on it, with the conception and composing, recording, and producing the audio and video material. My sound engineer Michael Hammond also produced, mixed, and mastered all the audio material. Lastly, the voices of 47 disabled interviewees are heard and seen through the project.

For the interviewees, my relationship with them ranges from frequent collaborator to those I reached out to and had not met before.

I’ve noticed you’ve had quite a few other songs released. Can you tell me what your first recordings and releases were?

Around 2017, I had my first EP released via New Amsterdam Records. I composed two violin/electronic tracks which were performed by Adriano Mateo and Monica Germino. It was a great experience.

Have New Amsterdam Records taken care of a lot of your recordings?

Yeah, they’ve helped me record all of my work over the years. I recommend disabled artists consider submitting their musical ideas towards the record label.

You also hold an Advanced Certificate in Disabilities Studies. What do you make of the amount of attention disabled artists are receiving in the media at the moment?

I think we’re receiving a little more attention. This is my own biased perception, but sometimes I think the UK media has been a little more open to the projects that really centre disabilities. I think the media in America struggles to contextualise it, don’t know the surrounding language, and because it doesn’t make sense to them, journalists just choose to pass on it. That’s from my experience, but I imagine it’s true for other disabled artists as well. Although I’ve never performed in the UK, I think I know other ensembles who have performed there in the past as well.

The British Paraorchestra released an album and reached the top of the UK Classical Music Charts in April 2022 with the album The Unfolding. Would you be willing to collaborate with them?

I love their work! I would definitely be interested in collaborating with them, and that album has been a favourite of mine.

What other arts would you be willing to get involved with alongside music?

I’ve already done some collaboration with dance, visual arts, and film – I guess it all depends on what comes my way, and the people I meet, etc. For example, I started working with these vibrational technologies to help feel the vibrations of music for deaf and hard-of-hearing audiences, which I’m excited about.

You’ve also been involved in a mid-Atlantic Ted X event, and your performance impressed me after watching it online. How did that event get up and running?

It happened more through a colleague of mine; they were involved in arts curation for them, so we started discussing the possibility of a talk. I decided then to focus on some of my thinking about disability with my creative source, and it all happened around five years ago, in 2017.

Was it an easy or hard task?

It was kind of both, because I had already written a lot of what I said in a paper just a couple of months prior to it, so I took excerpts from that. However, I obviously had to make it more speech-like and poetic, too. It also came quite a challenging time because my father was in the hospital for a little bit, but then I got the opportunity to practice my talk with any of his visitors. I just tried to practice as much as possible so it was in my muscle memory.

What would you say your greatest achievement is?

I’d say it is the release of my latest album. There was a lot of effort put into that released.

And, generally, how satisfied are you with the status of disability in your country at the moment?

I think that progression has been done, but there is always room for more. In my view, it is one of the social minorities that is most unrecognised, and it still needs to be legitimised as a minority.

Well, I have an EP being released in January, which is kind of continuing the release of my disability interview album. And then I’ll be going to Germany in the Summer for a residency, and there are some projects relating to that. What’s due to happen at that point hasn’t really been released yet.

Molly’s keeping herself busy, but I look forward to keeping as updated as possible with herself and her colleagues too in the future. You can find out more about her, listen to her music and check out so many more videos via her website as well. Plus, New Amsterdam Records are a record label I’ll want to investigate all the more. I have strong interests in improving the general wellbeing of all disabled people, but believe disability arts can play a substantial role in improving our lives for the better.

Thanks go out to Molly Joyce, New Amsterdam Records, Monica McGivern and Jiji Kim for the media shown.